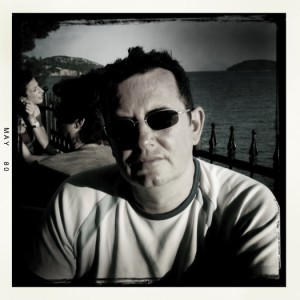 Simon started his career at Lowe Howard-Spink as an Art director in 1990.

In 1993 he left for a 3 year stint to help set up the launch of Chiat Day London (Now St Lukes) working on First Direct, Qantas and Reebok.

On returning to Lowes as a Senior Art Director he worked across the board on all their major accounts, including Vauxhall, Reebok, Lloyds Bank, Heineken, Tesco, HSBC and Unilever. With Tesco he launched their clothing business ‘Cherokee’, producing several award winning commercials and creating the red price roundel and ‘ping’ that became synonymous with all Tesco’s advertising.

In 2003 he was promoted to group head running Unilever on a European basis with the majority of work running globally.

In 2005 he produced the ‘Stunt City’ commercial for Sure deodorant, which ran globally and won – amongst other awards – a Cannes Gold.

Simon joined Grey in January 2006 and was made Joint Creative Director in December of the same year. Along with his partner Geoff Smith, he spent the next 18 months building up the creative department and raising the standard of the creative work not just on charity accounts like Women’s Aid and Parkinson’s Disease but also across all the major accounts including P&G, GSK and Dairy Crest.

In August 2008 he set up his own freelance company and creative consultancy working on projects separate from advertising including designing and writing books.

He joined McCann Erickson as Creative Director in January 2010.

He has been responsible for the Creative Direction and work on some of the agencies key clients including B&Q, Coca Cola, American Airlines, LOCOG, Subway and again Unilever. Implementing cross channel campaigns through TV, Digital, PoS, and many other social platforms.

The London 2012 Olympic work for LOCOG helped develop the most successful Olympic Games ever in terms of generating ticket sales, recruiting the ‘Games Makers’ and empowering our communities in the ‘Local Leaders‘ campaign.

2013 – present Creative Director of The At Last Emporium Ltd